Who needs laces? They’re an unnecessary encumbrance in today’s convenience-first society. When the weather gets warm, you want a shoe you can just step into and be on your way. You want something that keeps your feet light and airy while still accumulating envious looks. For every style and occasion, there’s a choice for the best men’s slip-on shoes that look as good or better than laced alternatives.

The thing is, when most men think of stylish slip-on shoes, they immediately jump to loafers and boat shoes. While those are both great options steeped in rich-style heritage, there are plenty of other options out there. We’re here to give some love to the best slip-on shoes that aren’t loafers or boat shoes.

These stylish alternatives range in formality from cotton espadrilles built for a day at the beach to velvet slippers designed to add flair to your black-tie ensemble. Each one comes from a rich-style tradition, mostly from outside the United States. We’ve gathered together a list of the best options out there to slip your feet into this summer.

Boat shoes and loafers are the most common slip-on shoes these days, but they are both evolutions of the humble moccasin. Moccasins were the traditional footwear of Native Americans that offered lightweight comfort and flexibility. European colonists in northeastern America adopted them in the 18th century. By the early 20th century, they became a staple of New England fashion.

L.L. Bean, the stalwart of New England fashion, has been selling its take on the moccasin since 1936. Mr. Bean named his version the Camp Moc and it was so successful that it spawned an entire category of shoes.

The Camp Moc is a cousin of the boat shoe, both evolving from moccasins in the early 1900s. Unlike boat shoes, the Camp Moc retains the original moccasin design for the uppers with four eyelets in the tongues, allowing a single lace to pass through. The only deviation is solid rubber soles, sometimes featuring heels, for better traction and protection than the moccasin’s leather soles.

The driving shoe is another member of the moccasin family tree, a cousin of the boat shoe. Driving shoes are defined by their unique soles. Instead of hard soles attached to the uppers, they have soft soles made from the same material as the uppers with rubber gripping attached.

This gripping can be small sections of various sizes or dozens of small rubber pegs and they always run up the backs of the heels. The design is closer to original moccasins than boat shoes because of the soft soles. Driving shoes are essentially moccasins with a better grip on the soles.

The Kenton Driving Moc from J.Crew stays true to the original driving shoe design. They are constructed out of soft suede with a single lace running through the tongues. The rubber gripping on the soles is divided into sections to give maximum flexibility and traction. 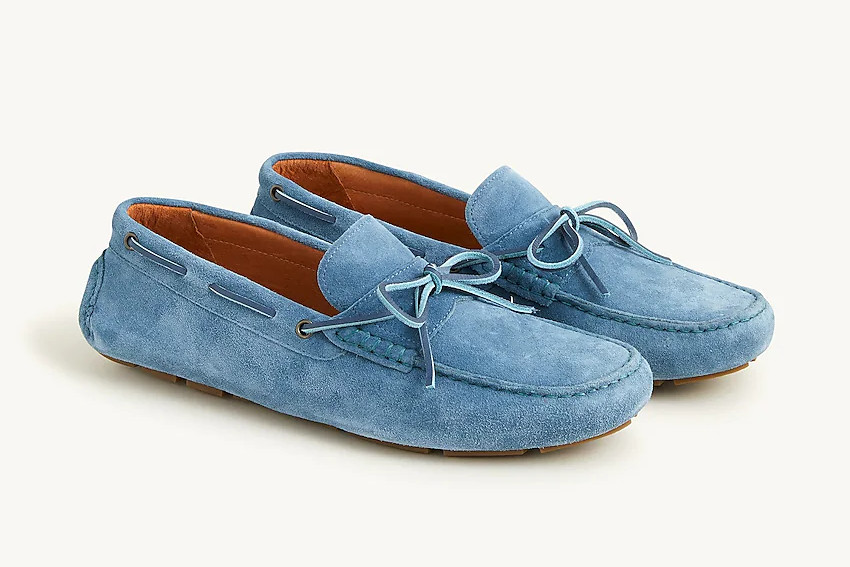 Birkenstock has been heralded for the comfort of its sandals for decades. Don’t tell anyone I told you this, but the secret ingredient is cork. The company molds its entire footbed out of cork, which provides not only a soft, shock-absorbing cradle for your feet, but the cork naturally breathes better than any artificial material. This means your feet breathe better, and this keeps them cool and prevents irritation and stink from moisture buildup.

Birkenstock’s cork footbed technology has also been applied to its clog-style Boston sandals. Being a German company, clog-shaped footwear is not unusual. However, it has taken a long time for Americans to warm up to the idea. Bostons have only recently matched the popularity of Birkenstock’s sandals. The acceptance was well worth the wait as the Bostons offer Birkenstock’s famous comfort and durability in a closed-toe shoe. 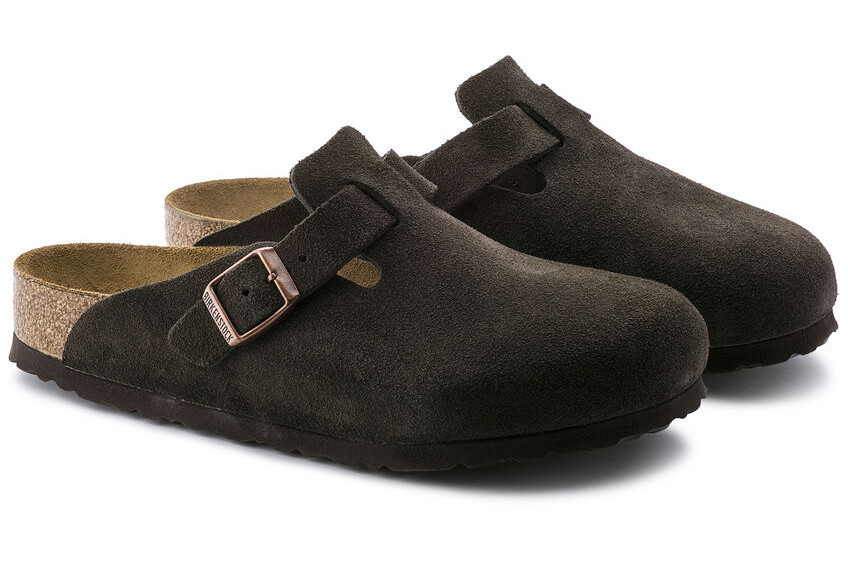 Sabah sells traditional Turkish slippers in fun modern colors and textures. Its shoes are handmade in Turkey using techniques that have been passed down for generations. The leather the Sahah uses comes from water buffalo, so it’s remarkably durable.

These particular slip-on shoes have been worn throughout the Arab world for centuries because of their combination of comfort and durability. Their functionality will transfer perfectly to your beach vacation or daily commute to work.

The Baba style by Sabah is essentially a mule. Mules are backless heeled shoes, traditionally made out of leather. While European mules usually look like loafers with the backs missing, Sabah has introduced a traditional Persian style with the Baba.

The rounded toes with a single center stitch provide a sleek silhouette that works with both formal and casual outfits. The color and patterns available are constantly changing each season, but the solid black and solid brown are always available and never a bad choice. 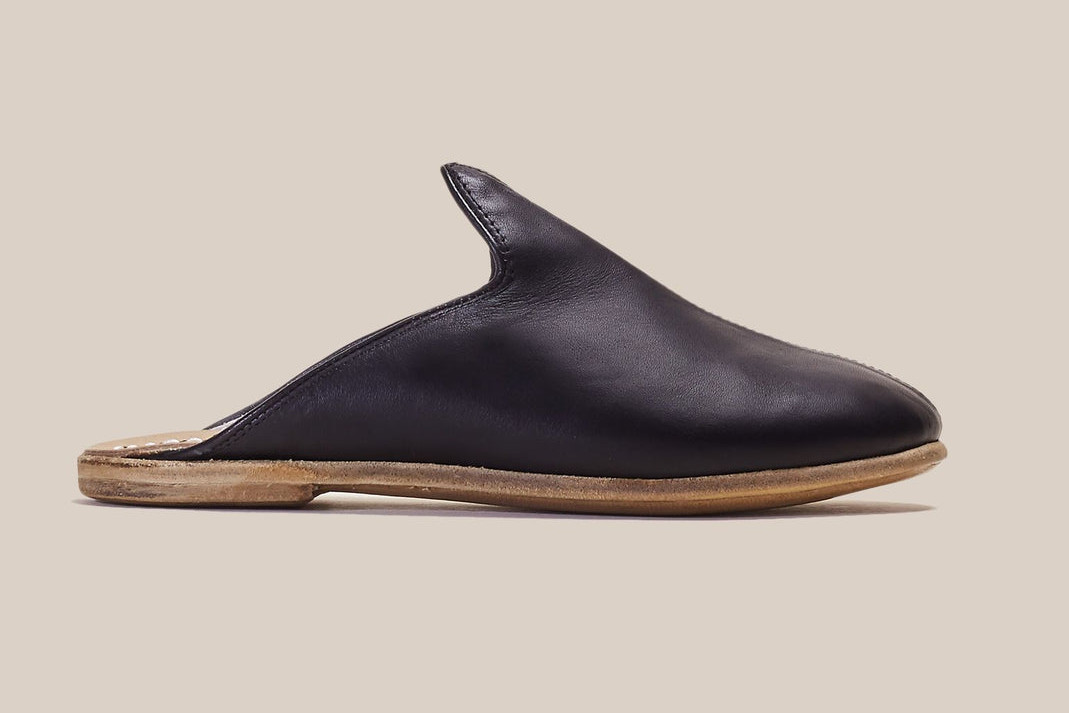 WP Standard has been around for well over a decade making top-quality leather goods. For most of that time, it only produced bags and small accessories like belts and wallets. The company likes to focus on a few designs and tinker away at them in an unrelenting drive for perfection. So it was simultaneously shocking and thrilling when it released its first shoe. The Mr. Grumpy is an all-purpose mule-style slipper masquerading as a house slipper.

With characteristic resolve, WP Standard has updated the Mr. Grumpy design with minor tweaks here and there. As they exist now, they feature single-piece upper Goodyears welted to flat leather soles with 15 rubber inlays. The heals have padding sewn in for additional support.

An interesting detail is that the toes are closer to rounded boot toes than slippers, meaning that if you wear them with pants that drape over your heels, they almost appear as if you’re wearing boots. 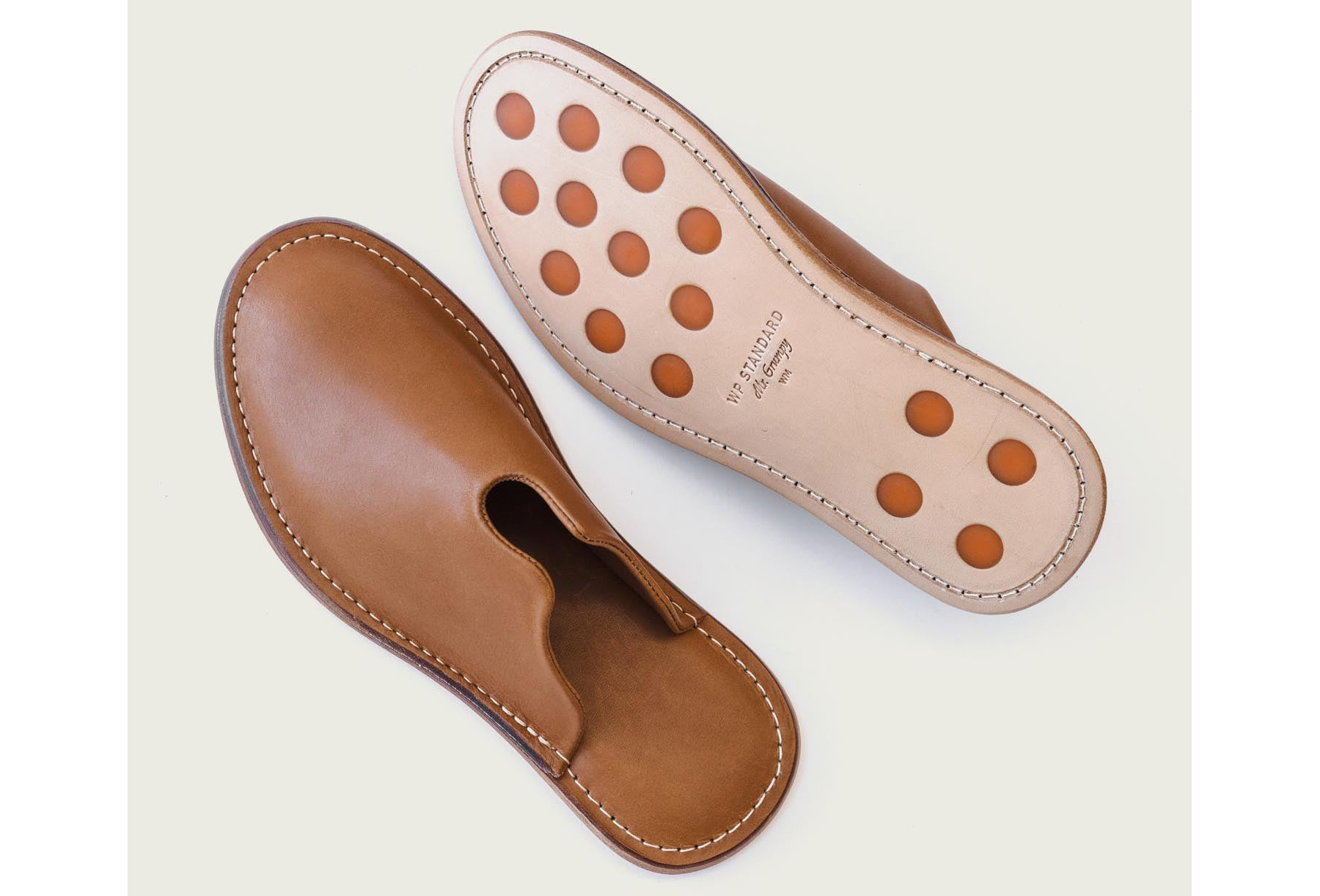 Huaraches are a type of shoe, often referred to as a sandal, worn throughout Mexico and the Southwest United States. They’re derived from the woven leather footwear worn for centuries by the indigenous people of that area. The loosely woven design provides your feet with ample air supply to stay cool in the hot desert climate.

There are many subtle variations on the design coming from local traditions, but they’re made with solid leather footbeds and loosely woven leather uppers. If you’re ever in Mexico, you can find local shops that have been making huaraches for generations, but the closest thing you can find on the internet comes from Chamula.

The Cancun from Chamula is a hybrid between a loafer and a huarache. The uppers use a loafer-style silhouette, but they’re constructed with woven leather. Leather lining on the heels provides more support than a traditional huarache design. These semi-casual slip-ons can be swapped out for your flip-flops on vacation or swapped out with your loafers for a night out. Chamula also added rubber soles for enhanced grip so they’re perfect beach and pool shoes. 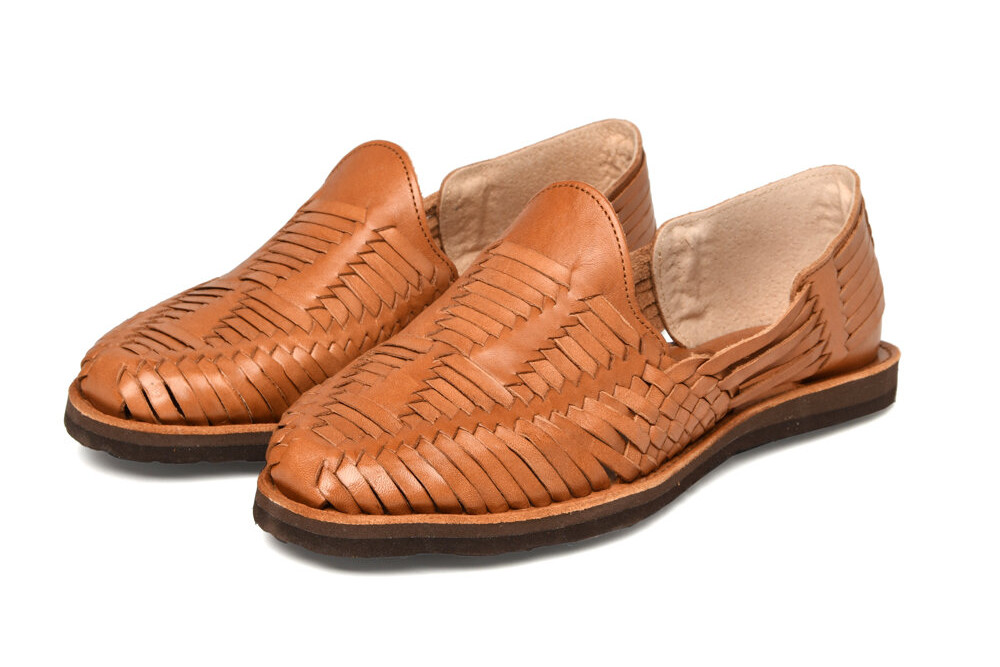 Belgian loafers, or simply Belgians, are a variety of slip-on shoes akin to loafers that are named after their country of origin. They differ from traditional loafers by having shorter heels, softer bodies, and more subtle details.

The penny loafer patches or tassels are replaced with small leather or fabric bows. They also generally feature piping rather than stitching around the toes and tongues. They are a more comfortable alternative to loafers because they feel like slippers to the wearer while remaining interchangeable in appearance.

Some would argue that proper Belgians should come from Belgium, but Las Vegas cobbler Robert August begs to differ. His line stands toe to toe with the European heritage brands in both appearance and quality. Better still, Robert August shoes are made-to-measure. Meaning you can customize the fit and finish so your shoes look and wear exactly how you want them to. You can even build your own custom design on the website. 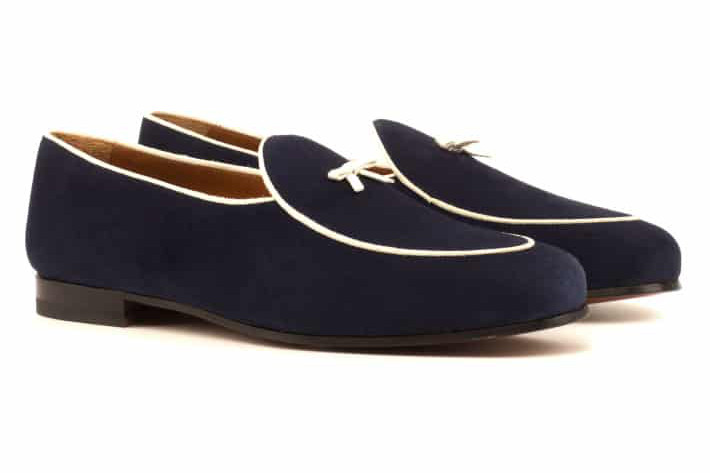 Stubbs and Wootton are hardly the original luxury slippers, as the design has been around since at least the 17th century, but its slippers are the best on the market today.

The brand is headquartered in Palm Springs, but its shoes are hand constructed from the needlepoint knit to the stacked wood heels in Spain. The price may seem steep at face value, but you’re getting what you pay for with the quality. Stubbs and Wootton will stretch your slippers for you if they don’t fit perfectly and it’ll resole your shoes when the soles wear out. It will also repair the stitching if the needlepoint ever gets damaged.

The designs range from cheeky, like a “Do Not Disturb” hang tag embroidery, to classic, like the Persian rug-inspired patterns. The company also has collaborations with Monopoly, Peanuts, several Ivy League universities, and Wm Brown Magazine. It offers a wide range of slip-on shoes but its best, in our opinion, are the needlepoint slippers. Though the toe boxes are leather lined for support, the rest of the uppers is linen so they are lightweight and breathable. 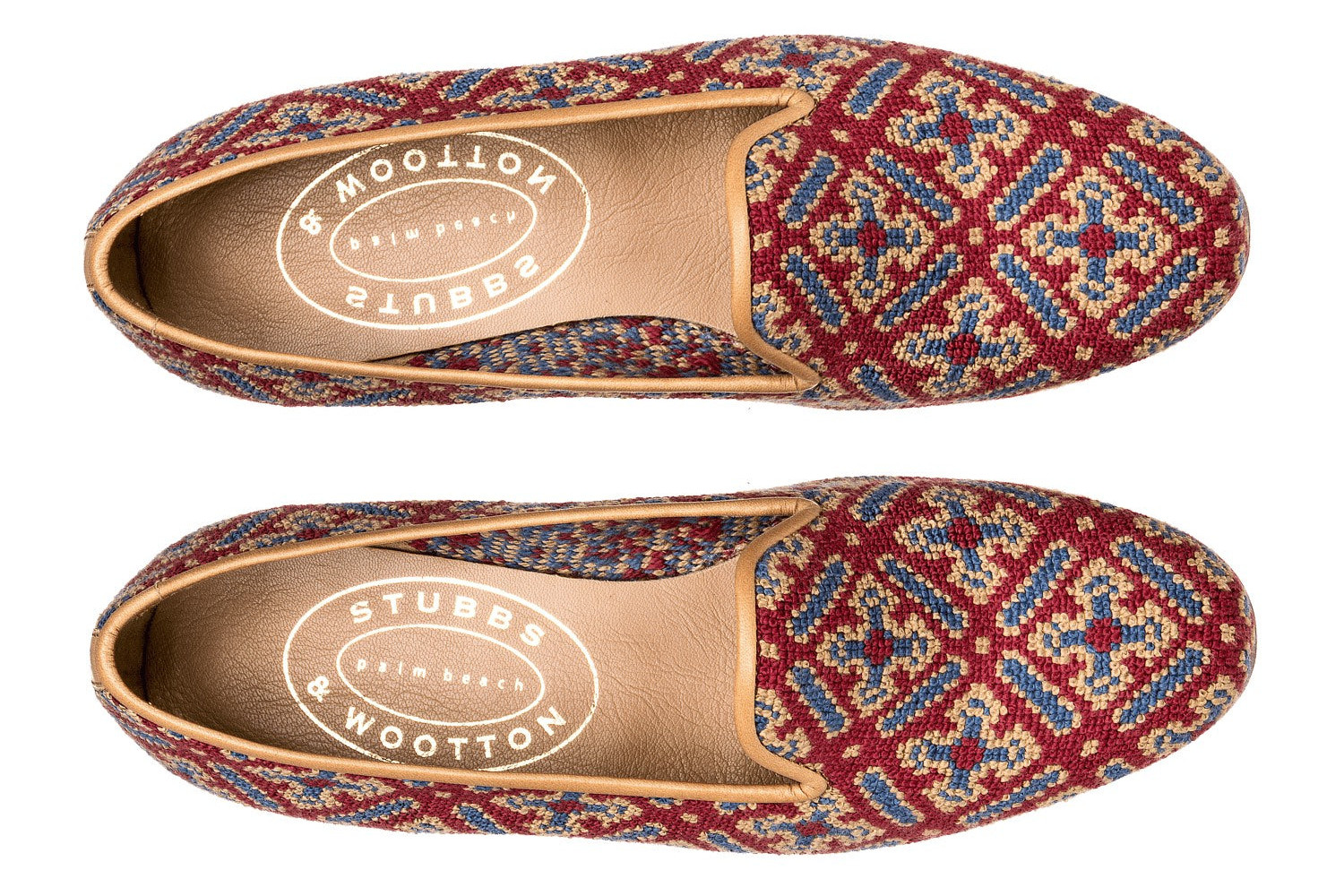 Del Toro makes a wide range of comfortable and stylish slip-on shoes, including loafers and Belgians. However, its best slide-and-ride option comes from its line of velvet slippers.

Velvet slippers as we know them today are an evolution of English smoking shoes or house slippers. They were designed to be worn around the house when having an after-dinner smoke or just lounging about before bed. Modern interpretations with more outdoor-appropriate soles have had a moment for the past few years.

Del Toro made a clever move to set its velvet slippers apart from the competition. It added two rubber insets to the soles, just as you would find in most leather dress shoes. With that traction, you can take this classically at-home design out and about. It’s a good thing, too, because you’re going to want as many people as possible to see you wearing them. They offer a range of solid colors, but the black embroidered with a Jolly Roger is the highly recommended choice. 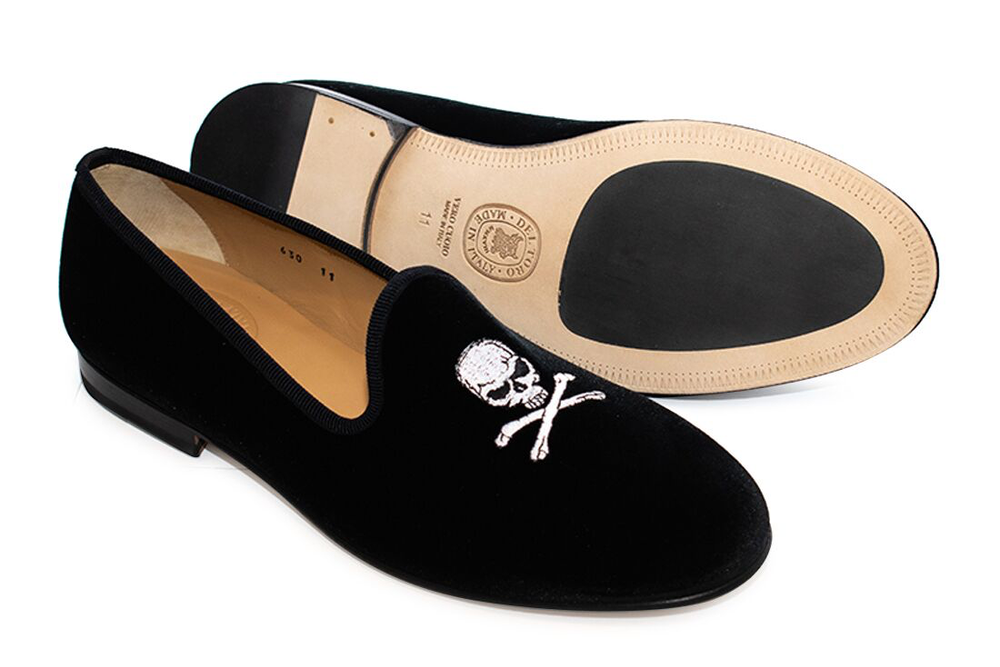 Modern designs usually feature rubber soles glued to the rope footbeds for enhanced durability and traction, but traditionally the soles were rope. The name is derived from the type of straw rope that was originally used to produce them, known as esparto.

Espadrilles have been around for centuries in France and Spain, but Soludos is primarily responsible for making them fashionable in America over the past decade. The Dali model is named after the famous Spanish artist Salvador Dali, who was known to be a big fan of espadrilles.

These shoes follow the traditional design very closely, with some minor modern upgrades like rubber soles. These slip-ons are a more sophisticated upgrade to your rubber slides or thong sandals. Wear them casually when you need to step out for some errands or meet up with friends. 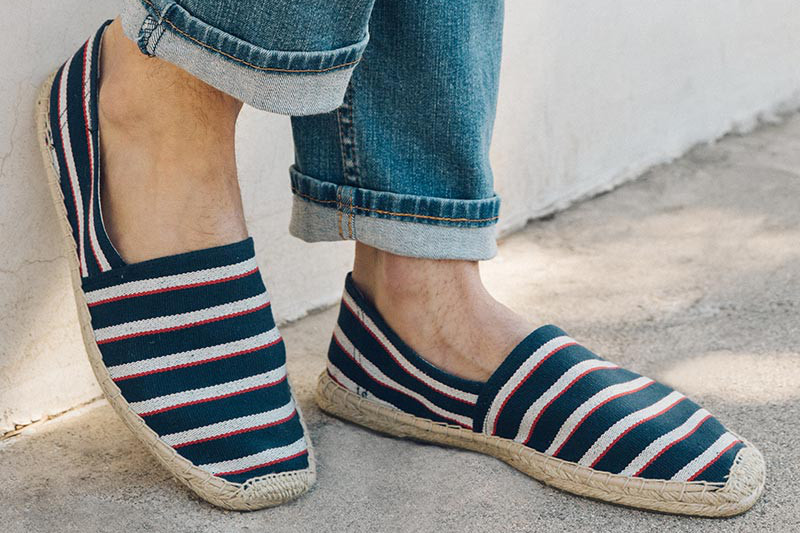 The range of slip-on shoes out there goes far beyond boat shoes and loafers. Sure, they have their place, but they can also get stale. You can find slip-ons on this list to match any outfit and any occasion. They are a significant upgrade to sandals and eliminate the tedious need to tie laces. Find the right shoes on this list to match your style and budget and you will find your new go-to footwear. A great pair of slip-on shoes will always be the best don’t-have-to-think-about-it, goes-with-everything, minimal effort shoes. Yet you won’t be skimping on style because every shoe on this list is a wardrobe upgrade, guaranteed.